Okay, okay, I know there are about a million things that make Cincinnati rock. When we first moved here, it took us some time to warm up to the Queen City and discover all the cool things it has to offer, but ever since then, we’ve been practically obsessed with it. Whether we’re following the crazy changes happening in OTR, stuffing our faces with Skyline coneys, or sweating our faces off at Japps, we’ve grown to love this city. So, in tribute to our girl Losantiville, we created this (with the help of a few friends of course). ENJOY!

Founded in late December, 1788 by Mathia Denman, Colonel Robert Patterson, and Israel Ludlow. John Filson, the original surveyor, named it “Losantiville.” It was renamed “Cincinnati” in 1790.

The “Queen City” came from the Henry Wadsworth Longfellow poem “Catawba Wine” in which he referred to Cincinnati as the “Queen of the West.” Cincinnati was the first city to produce this type of wine in 1828.

Legend has it that he was in town sitting on the porch of what is now the Taft Museum, drinking wine grown in what is now Mt. Adams, and loved it so much he wrote the poem – probably schnockered.

By the mid 1800′s, the city earned the nickname, “Porkopolis.” Cincinnati was one of the major players in the hog packing industry. Slaughterhouses were a major part of Cincinnati’s economy.

Procter and Gamble was started by two immigrants, William Procter, from England, and James Gamble, from Ireland.

Procter started out as a candle-maker, by taking full advantage of the fat and oil by-product from Cincinnati’s slaughterhouses.

Gamble started out as a soap maker, also taking advantage of the same by-product. In 1837 they formed the legendary Procter & Gamble Company.

The Cincinnati Reds were the first paid pro baseball team in the country (established in 1867, all pro in 1869) and first to play under the lights (1935 at Crosley Field).

President of the Cincinnati Reds, August Herman, came up with the idea of “The World Series.”

The Jewish Hospital was the first Jewish hospital in the United States. It was established in 1850 as a result of the cholera epidemic and the need to treat poor jews in Cincinnati.

Harriet Beecher Stowe wrote Uncle Tom’s Cabin based on her experiences and interviews while living in Cincinnati. She based her characters in the book on stories she was told by runaway slaves in Cincinnati. It’s been reported that seeing a husband and wife being sold apart on the Ohio River was one of the events that galvanized her to write the novel.

The character Eliza was inspired by an account given at Lane Theological Seminary in Cincinnati by John Rankin to Stowe’s husband Calvin, a professor at the school.

The Harriet Beecher Stowe House is located at 2950 Gilbert Avenue and is open to the public.

Legend has it that when Mrs. Stowe visited the White House, President Lincoln exclaimed, “So, this is the little lady who made this big war!?”

Uncle Tom’s Cabin was the second best-selling book of the 19th century, right behind the Bible.

Founded by Rabbi Isaac Mayer Wise in 1875, Hebrew Union College – Jewish Institute of Religion is the nation’s oldest institute of higher Jewish education and is the academic, spiritual, and professional leadership development center of Reform Judaism.

“Roll Out the Barrell!”

At one point, Cincinnatians consumed twice the national average of beer – 40 gallons / year for every man, woman, and child in the city.

Christian Morelein was once one of the largest beer brands in the country.

Between 1875 and 1900, seventeen breweries were located in Over-the-Rhine and West End. Vine Street in OTR once had over 130 beer halls, saloons, and theaters on it alone!

Cincinnati was the 3rd largest beer producing city in the nation (behind Milwaukee & St. Louis), but they exported most of theirs, while Cincinnati drank most of theirs (most stayed within 3 miles of the brewery).

He’s most known for being the only president to serve on the Supreme Court after leaving office.

He is also known for being the heaviest President in History, weighing in at over 300 lbs.

He got stuck in a bathtub on inauguration day and had to be rescued. Some say they used butter to coax his large frame from the tub.

During the Civil War, Cincinnati was threatened by the confederate Cavalry of Brig. General Albert G. Jenkins, who upon scouting the city’s defenses and manpower – mostly local militia volunteers called “Squirrel Hunters” – decided an attack was pointless.

The Black Brigade is the first, organized, African-American Army unit. Formed during the Civil War, the unit was enlisted in 1862 to help build fortifications to protect the city of Cincinnati. A monument dedicated to the Black Brigade is located in Smale Riverfront Park.

Ulysses S. Grant was born in Clermont County in 1882. His favorite horse was named “Cincinnati” and is the same horse he rode to Appomattox Court House to negotiate Robert E. Lee’s surrender. Nearly all depictions of Grant in drawings, granite, and bronze, are astride Cincinnati, including the Ulysses S. Grant Memorial in Washington, D.C.

The first concrete high-rise building in the world, the Ingalls Building, was erected in 1902 at Fourth & Vine in Cincinnati.

Daniel Carter Beard founded the Sons of Daniel Boone, which later merged with the Boy Scouts of America, in Cincinnati in 1905.

Union Terminal is the largest halfdome in the western hemisphere. It was very successful in the 1930′s & 40′s, but by the 1950′s it faced stiff competition from automobiles and passenger airline service. Train service was stopped in 1972 due to declining demand, but started again in 1991 when Amtrak began operating there.

It’s also the inspiration for the “Hall of Justice” from the 1970′s cartoon, Super Friends.

Joseph B. Strauss, born in Cincinnati and a graduate of the University of Cincinnati, designed the Golden Gate Bridge. He placed a brick from UC’s original McMicken Hall in the bridge’s South Anchorage.

Macy’s might be thought to headquarter in LA or NY for its fashionable taste, but it is headquartered in Cincinnati. In 1945 the corporate offices were relocated from Columbus to Cincinnati.

George Rieveschl, who earned PhD degrees from the University of Cincinnati, invented the first antihistamine. Benadryl was first made available in 1946 and only through a prescription.

The first functioning heart-lung machine was developed at Children’s Hospital Medical Center in 1952 and made open-heart surgery feasible.

The first oral polio vaccine was developed in Cincinnati in the late 1950′s by Dr. Albert Sabin.

She might be famous from Sex and the City, but she’s actually from Ohio. Before moving to NYC, she attended The School for Creative and Performing Arts in Cincinnati.

This graphic took several months to put together and we couldn’t have done it without a lot of help from some pretty awesome people. If we forgot anyone here, let us know!

Awesome people who helped out: 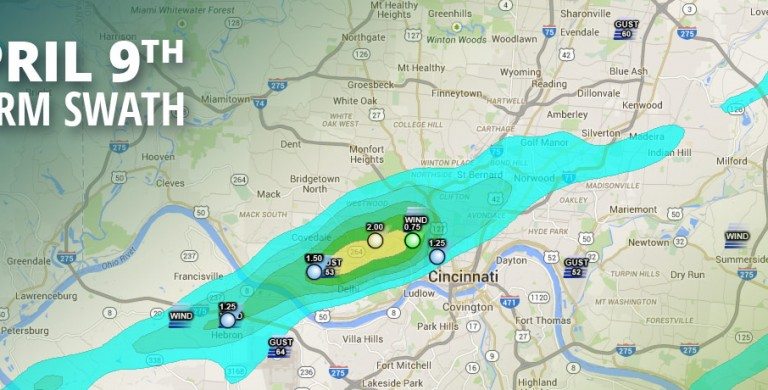 It Pays to Spread the Word About Getting a Roof Exam!